Over the years New York has built up a larger-than-life repuation: from Broadway to Wall Street, the Yankees to the Juilliard, chances are if something big is going down, it’s happening in New York.

With that in mind, we recently headed there to see how the #NewEraBiz was blossoming in the Big Apple.

By #NewEraBiz we mean the new-era business, the one that’s designed to be open and collaborative in nature and make things move. The type of business whose collective spirit inspires others around it and ultimately helps form an ecosystem of brands and partners who are united by a common thread.

After doing several trips last year to explore a series of exciting new developments in the collaborative economy (yet to be defined), it was exciting to get back on the road and experience what’s happening first-hand.

If you have read any of our blog in the past, you will have maybe noticed that there are three key industries we have been focused on for industry-specific posts:

+ The Redistribution of Dealflow

Part of it is personal preference and part of it is collective importance. Of course there are numerous other exciting industries and important trends happening at the moment, but these three in particular really need to be redefined and reinvented before we are going to see real progress and ‘economic growth’ again.

That’s because everyone needs to eat (well!), (almost) everyone gets dressed in the morning and everyone needs to be bankrolled if they want to start a business. In a system where Big Ag dictates what we eat, Haute Fashion defines what’s stylish and Big Banks decide who gets money, you get big problems.

So what’s moving and shaking with the #NewEraBiz in New York?

FOOD is happening, and in a big way. It was certainly the focus on this trip.

There are several Whole Foods located in Manhattan (probably 5 or 6), all of them huge, and all of them are packed. The most reputable real-food market in the big-grocery business recently made headlines when they announced that all products in their stores would be GMO-labeled by 2018. Evidence that people are becoming increasingly conscious about what they eat can be seen right away when you walk into a Whole Foods in NYC: 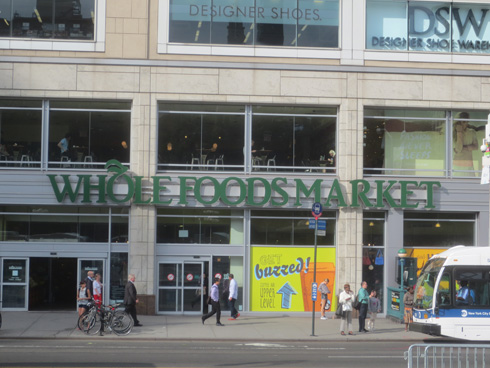 While Whole Foods (many times referred to as ‘Whole Paycheque’) is great if you fit into the affluent-urbanite category, the reality is that the majority of people just can’t afford to pay those types of prices for their food on a daily basis. Which is why it is exciting to see Food Cooperatives (Coops) emerging in many middle-class neighborhoods. One in particular, the Park Slope People’s Coop in Park Slope, Brooklyn was full of everything you could imagine when it comes to real food – local produce, organic ingredients, whole-grain baking, etc. – and the prices on several items were about half of what you would find in a Whole Foods.

Coops function differently than traditional grocery chains. To be a member, and therefore purchase goods at the Coop, you must put in a volunteer shift every month and pay an annual membership fee. Thus Coops don’t pay the same labour expenses as a traditional grocery chain. They also markup their items at a fraction of what traditional chains would, and in many cases, depending on how the Cooperative is setup, will redistribute profits to the members.

The Coop structure is a very promising development in the #collaborativeco and something we will be researching in greater depth during the months ahead.

The reason for this is simple, as the real-food revolution is all about bringing the farmer’s food directly to the table.

Farmers and food vendors are able to take their product directly to the consumer, which helps the farmers cut out the middleman. From a consumer’s perspective, it is very reassuring to not only see the people making the food, but to hear their stories. In a world where food has been commoditized, among other things, outdoor markets bring everything back to earth. 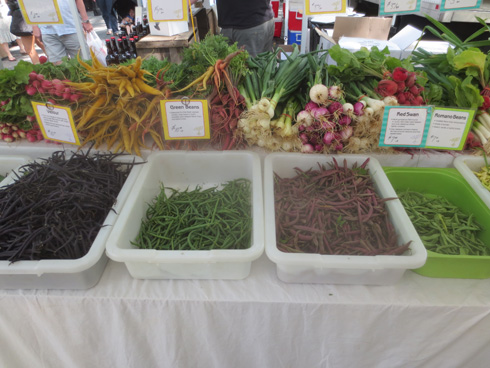 The hallmark of the NYC outdoor markets is organic everything – from slushies to sandwiches – and an increasing array of biodiversity in crops like beans, tomatoes (heirloom tomatoes to die for) and others.

Artisan is a buzzword that food-marketing mavens have definitely caught onto, so watch out. At the core, however, it relates to the craft of making or manufacturing the food to the highest of its potential.

One example is chocolate. Thanks to the whole industrialization and globalization of food, many ‘chocolate bars’ on shelves aren’t actually chocolate anymore. They have been cut with every filler, sweetener and artificial flavour imaginable and labeled chocolate bar. That’s why companies like Mast Brothers have come to fruition:

In the heart of Williamsburg, Brooklyn, they handcraft chocolate bars using the best beans from around the world.

Artisan is about bringing food from the source to you. So the story is a key part of every artisan vendor’s strategy – if they don’t have a story, they aren’t artisan. Luckily NYC is teeming with artisan vendors like Mast who are the real deal.

After spending quite a bit of time Europe last year researching the New Era of Fashion, it was quite an interesting to contrast the action over there to New York.

+ A New Era of Fashion

While New York is a big and very important fashion market, they are definitely far behind Europe when it comes to ‘sustainable fashion.’

This can be seen not only in the lack of consciousness about #sustfash for the average New Yorker, but also by the lack of marketing initiatives on the businesses part, meaning it’s not top-of-mind for consumers (yet). After a long stroll through the Fashion District, there was very little evidence of any ‘sustainable fashion’ marketing and whatever we came across was put up by brands we were already familiar with. Certainly there are no brands targeting the young generation, a big missed opportunity, especially when you compare the ‘sustainable fashion’ movement to organic food.

On the other hand, there are many young artisan and upstart designers who are coming to market in the US with a ‘sustainable’ focus. Additionally, there are a few cool initiatives being done to knit together these emerging designers and give them more resources to move to market. Overall though, it looks like NYC has some work to do in the #sustfash market, especially compared to #realfood.

Only this year did we start writing a little bit about #NewFinance in the US.

That’s because the big story was, and continues to be, the rolling out of the JOBS Act, which will effectively legalize everyday Americans to make equity ‘crowd’ investments in early-stage American startups and small businesses – at least that’s what it set out to achieve.

Undoubtedly crowdinvesting is the future frontier for finance, but each country is taking their own approach to it. While the UK has focused more on a case-by-case basis (ie. Seedrs), the US has opted for a full-legalization approach, which is causing delays and a lot of ambiguity.

Now many are saying that the JOBS Act is so watered down that it will be up to States to come up with their own regulations to legalize true crowdinvesting. Until something moves in one direction or another, however, the real stories related to #NewFinance will be happening outside of the Big Apple.

NYC provided a great opportunity to see the #NewEraBiz coming to life, in food anyways. To actually see and feel this change is very exciting because a of its magnitude, which will eventually flip ‘business’ on its head. The tides are turning and the Bull is no longer behind Wall Street. 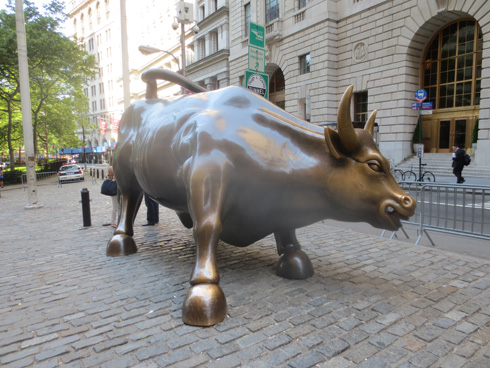 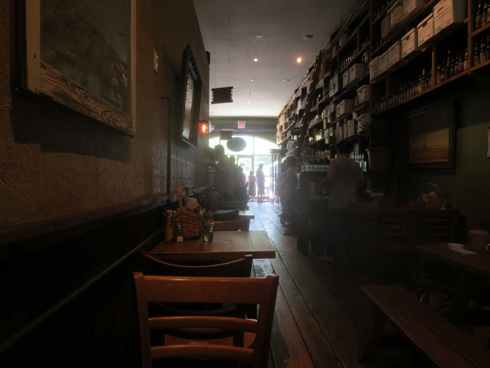 “The secret of change is to focus all of your energy, not on fighting the old, but on building the new.”

By focusing on the new, and truly collaborating, we can create a whole new era of business and make it an unforgettable journey in the process. It will take new business models, strategies and everything else, but there’s no use trying to pretend anymore that the old way still has legs.

The summer months provide a great time to chill out, sit on the patio and think things through. So take advantage because September, the time to start fresh, will be here in a heartbeat.