A New Era of Business – FOOD

The New Era of Business reports are focused on the future of important industries and include examples sourced from around the world.

The New Era of Business begins – the walls of the insular, profit-driven corporation are falling and an open, demand-driven ecosystem is forming in its place. To commemorate the beginning of this occasion, we thought it was time to start writing about how to start shaking up the industries we love the most. As food is something that is so central in our everyday life, we picked it as the industry to write our first New-Era of Business post – it’s time to turn up the heat and spice things up!

Problem #1: The majority of the ‘food’ that we eat is not natural

While pondering this troubling thought, we went to go pick up some apples from the produce section. Incredibly, the only apples that could be bought were shipped from another continent, this during a time of the season when local apples are ripening en masse.

Problem #2: Local production equates for a minimal percentage of the total

Craving more natural food, we went to another supermarket down the street. At this other supermarket, we were able to buy food that can safely be classified as natural, let’s call it whole food, and an abundance of local apples; however, filling up the shopping cart with ‘whole foods’ meant leaving the store with a significantly lighter wallet.

With these three problems alone, it becomes very apparent that we need a radical shift in our food ecosystem. All of the examples used in this particular story are from Canada, but the underlying theme is visible in all the other parts of the world we have visited, just to different degrees. The world of food is dominated by megabrands (see the chart of who controls the food ecosystem) who care about one thing – the bottom line. The entire process, from the moments the seeds are planted in the ground to the moment we take the first bite, needs to be reinvented.

To jumpstart this process, we thought it would be good to look at our food ecosystem on three levels:

For each category, we will then look at a few counter trends and new ideas that we have seen or heard about during our travels around the world. At the end, we will list what we see as the market beacons, new businesses that illustrate where the market is headed, and talk about some simple steps to action and opportunities for collaboration.

Let’s start with the food itself.

If we are going to begin to reinvent the food system, we need to know what we should be eating. The first step is to identify what foods we have enough of and which ones we don’t. By walking through most of the major supermarkets in the world, it becomes obvious that we are missing the main ingredients – real, fresh food.

To counteract this trend, there has been a lot of innovation in food from around the world. A few examples include:

the raw food movement on the West Coast of Canada

Other trends that are moving the dial, include a boom in the number of vegetarian and vegan restaraunts, the demand for organic (ie. pesticide free) products and the marked increase in dietary ailments (ie. diabetes, celiac, etc.) which have created a whole new line of diet-specific products (ie. gluten free, sugar free, etc.)

While these trends are good signs, they have yet to reach scale and be brought to a level where prices reach ‘normal levels.’ To hit this level, the next big shift needs to be in food production. 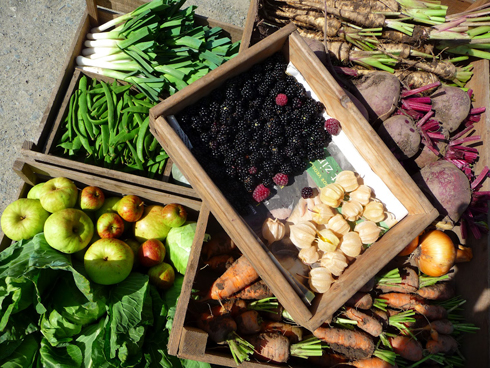 Using the apple context, where it is easier and cheaper to buy an apple from a country across the world than from a farmer down the road, it becomes obvious that the whole food-production ecosystem is the opposite of the way it should be. Rather than creating a distribution system that caters to small-scale local production, we instead have one that was built for industrial global agriculture.

Of course big business would argue that this is the only way to effectively feed the planet, but at this point they have lost all credibility. We need to shift the production power back to the local producers and create an environment where global food distribution is reserved for non-staple foods, like chocolate and coffee. A few trends that signify the market is starting to move in this direction, include:

The boon in local farmer’s markets

Other trends include the creation of online local food networks, where local producers connect via social media to exchange information and host events, public campaigns against multinational agriculture giants (ie. #StopMonsanto) and creative projects like the Tiffin Project in Vancouver to help make it more affordable for chefs to buy local ingredients in restaurants.

It’s clear that there are many forces that are acting to restore local food production and encourage more businesses to source local ingredients. But it’s not enough, unless we start to change the way we talk about food and how we eat.

Food Culture – The Way We Eat

Every place around the world has its own food culture. In South America, it’s about eating with friends and enjoying life. In Europe, people love to take to the streets and catch up with friends at a local restaurant. In North America, people enjoy their comfort foods and favor convenience. Regardless of where you go, however, there are some similar underlying themes to the mainstream eating culture:

We need to change this culture and start creating environments where people feel good about the food they are eating and the people they eat with. Food should be a celebration, it should be communal and it should fuel us to do big things. Trends that illustrate this transformation include:

Community kitchens at the U of T

Serve the other person in California

Other encouraging trends include, movements like the Slow Food Movement, food ‘activist’ chefs such as Jamie Oliver, and an increasing curiosity, especially in the younger generations, about the food we are eating.

To illustrate the collective impact of all these trends, we have put together a list of four ‘beacons’ who we think illustrate where the food market is going.

The People’s Supermarket is community-based supermarket with a mission to redefine the whole local-food buying experience. It functions as a cooperative, where members pay a 25 Pound annual fee and commit to four hours per week of volunteer service. Make no mistake though, it is for-profit venture, but returns are distributed back to community members in the form of discounts and price reductions. Every month, members attend an AGM (annual general meeting) to decide on aspects of the management of the business, while a Committee or Board makes the big-picture decisions. 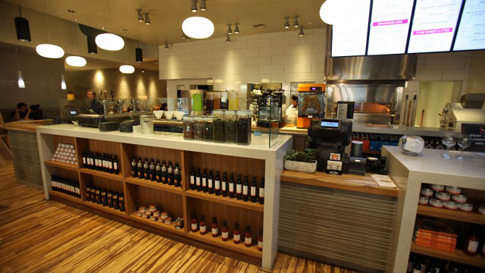 LYFE kitchens wants to reinvent fast food one brussel sprout at a time. LYFE (stands for Love Your Food Everyday) was founded by the former chief operating officer of McDonalds, Mike Roberts. According the (AMAZING) Wired Magazine article (click to read article):

“Lyfe’s aim is not just to build a radically sustainable, healthy brand of fast food. The Former Golden Archers hope to transform the way the world produces organic ingredients, doing for responsibly-grown meats and veggies what McDonalds did for factory-farmed beef.”

The first ‘prototype’ store opened a year ago, but the goal is to expand to 100’s of locations in five years. Expect to see meals with 100% local and organic ingredients, along with local beer and wine. They are bringing fast food from the dark days of frankenfood into a new era of freshness.

Credibles is bringing crowdfunding to the local food markets, but with a twist. Rather than simply donating to a local food producer in exchange for a reward, contributors receive Credibles – a currency that can be validated at any of the local enterprises funded on the Credibles platform. Initially, the Credibles will be distributed as a printable coupon, but they will eventually be upgraded to a mobile currency.

The site is launching in Beta mode in the New York and San Francisco market that hopes to sprout a new-era food ecosystem using patient-money principles. 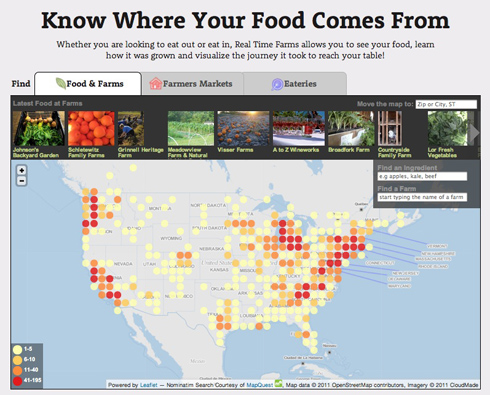 Real-Time Farms is a ‘crowdsourced nationwide food guide’ according to the site. It combines the power of the crowds with the passion for local food and provides a visual representation of local-food producers across the US.

On the Real-Time Farms site you can see locate local artisans, markets, farms, eateries and everything related to the local food scene. The site is an index for the next-generation of food producers, which prompted the Huffington Post to ask ‘is this the Future of Food Guides?’

Let’s kickstart this process. From what we buy in a given day at the supermarket, to what we order at a restaurant, to how we talk about food with our friends, it all makes a difference. But entrepreneurship is the real arena for impact.If you are looking to fund a food enterprise, think about crowdfunding (ex. below) and check out our research on crowdfunding strategy:

And remember, while organic+ is important, the real potential for shaking up the food industry lies in Business Model Innovation.

Are you making a move to shake up #RealFood?