It is time to shift the focus of Building Blocks for the New-Era Business from the PLAN phase into TEST phase. While many ideas sound absolutely fantastic on paper, knowing whether or not people want what is being created is another story completely. That’s why we will look at a new strategy for demand testing in today’s post, using crowdfunding platforms as the backbone.

+ Building Blocks for the New-Era Business

Up to this point, we have covered several aspects related to planning a business. The planning tools (links at the bottom of the post) we created have a lot of utility for people looking to create scalable ventures that require some thought to the business model, strategy and/or numbers behind the venture. Some people may simply want to launch a small-scale social enterprise, or try experimenting with a quirky idea – you don’t necessarily need a full plan in order to test demand, but we do recommend you at least open a conversation on a blog or prototype the idea (see post Prototyping an Idea – a Visual Process) to get some basic market feedback before going to TEST phase.

Crowdfunding has started to spread like wildfire around the world as people begin looking for alternative ways to fund their ventures and organizations. While crowdfunding itself refers to the process of raising small amounts of capital (via donations) from a large amount of people, there are several possible applications for crowdfunding. One such application is that of a reverse market, as Kickstarter and other similar platforms have shown.

While some sites in the world function as pure crowdfunding platforms (ie. Goteo, Catarse, etc.), where ideas are funded only if they are beneficial to society as a whole, the majority of the top crowdfunding platforms function as reverse markets. In this sense, it is possible to ask the market, do you want this?, before the product is even made. This helps solve one of the biggest problems related to the current model of capitalism – overproduction – where goods are made based on corporate forecasts and market-growth projections.

It’s an unfortunate side affect of the top-down mentality preached by the old school. The old-school process takes an idea through a vertical decision-making tree that usually ends up either failing the entrepreneur or having them be forced out of their own company by their ‘investors.’ It breaks down like this:

The new-school process is horizontal, its connected with the market and it’s designed to put the power in the hands of the entrepreneur. To kickstart this process, we propose the following strategy: 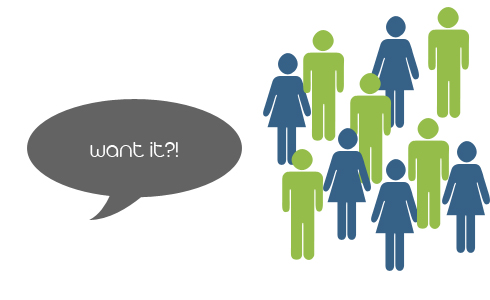 The amount of money that you try and raise in a campaign will be dependent on your goals. If all you want to do is literally test an idea, run a small-scale campaign on your market for $1,000 without any promise of the actual product. If, on the other hand, you are ready to go to market and need to test market demand and raise capital at the same time, make sure you crowdfund enough to get going. We haven’t seen any live of examples of small-scale testing (please send any over if you see them), but the following campaign was good examples of full-scale campaigns on Kickstarter:

The execution of the campaign is the real key. If you are trying to plan out the strategy for your campaign, make sure you check out one of our blog posts below:

When you are going through the process of creating a campaign, think about it in three phases:

The general principle here is that you are trying to validate your idea using real market data. It is easy for entrepreneurs to hype their own idea and promise a mountain of cash based on an Excel forecast. Here’s a chance to put the forecasts to the test and get the market involved early.

Not only does this process reverse the way the product is produced, it will also change the way you launch your business. A business with validated demand, a crowd behind them and cash in the bank, has the ability to move in many different directions at the next stage. You could look for strategic capital, stay organic or pursue a number of other different paths, but the power will remain in your hands to make your next move. The process provides a new way to TEST out the vision you create in the PLAN phase on the market with very limited resources.

Stay tuned next week as talk about how to SPREAD the idea using the social media pipelines. And remember, this is just an experiment. We are simply proposing a new-school process to take ideas to market and redesign the way businesses are built. Give us your feedback, send questions, or leave a comment. And watch in the coming months as we start to test our own theories … stay tuned … Building Blocks for the New-Era Business rolls on.