Everybody is talking about the crowd these days. Crowdfunding is grabbing headlines in every corner of the world as the movement is transcending borders, cultures and even political barriers. That’s why in this edition of Business Model Breakdown, we will break down the opportunities in the new crowdfunding ecosystem and look at potential business models that are emerging in the process. 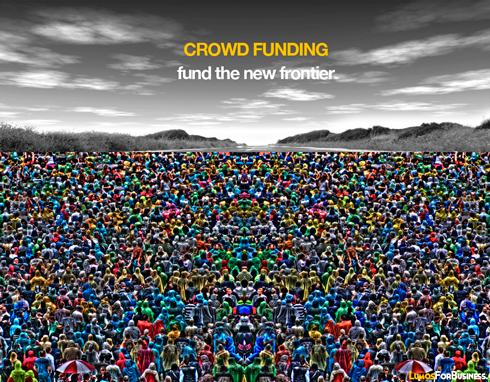 Back in 2009, following the near collapse of credit markets in 2008, a site called Kickstarter launched a platform online with the hopes of igniting what was then a little-known process called crowdfunding. Through this process of crowdfunding, the idea was that people would donate money to their favorite creative projects in exchange for a unique reward – by getting a lot of people to each contribute a small amount of money, off-the-radar projects would get the funding they needed. This concept, which in 2009 was little more than a pipe dream, has suddenly become a catalyst in redefining how creative projects and new ventures are funded.

The proof lies in the numbers. Kickstarter raised almost $100 million dollars on its platform in 2011 and at current projections is going to raise over $150 million in 2012. The company has become the model for hundreds of new crowdfunding sites globally, and suddenly crowdfunding is becoming a vibrant ecosystem in and of itself. And it’s not only creative projects dreamed up by offbeat artists that are getting funded – just take a look at what are, in my opinion, the three landmark projects to get funded in crowdfunding’s early history.

As crowdfunding continues to take off, a new era of crowd-based financing is set to begin with the inception of crowdinvesting (see blog post Finance 2.0 – Wall Street Meets the Web). Rather than soliciting donations, entrepreneurs posting projects on crowdinvesting platforms will allow investors to buy equity in the company. At the moment, the concept is only legal in the UK and the US (because of securities regulations), but we believe that this is the beginning of a domino-like effect that will inevitably make crowdinvesting legal throughout the world.

So how do these platforms make money?

Whether it is a crowdfunding or crowdinvesting platform, both have commission-based business models where they take a percentage of the profits (typically 4 – 7.5%) from every successfully-funded campaign on their platform. Crowdinvesting platforms have the added advantage of being able to take an equity-stake in successfully-funded businesses if they so choose, but in general the whole business model for crowd-based investment platforms is driven by transaction volume. The more projects that are launched and successfully funded on these platforms, the more money they make. 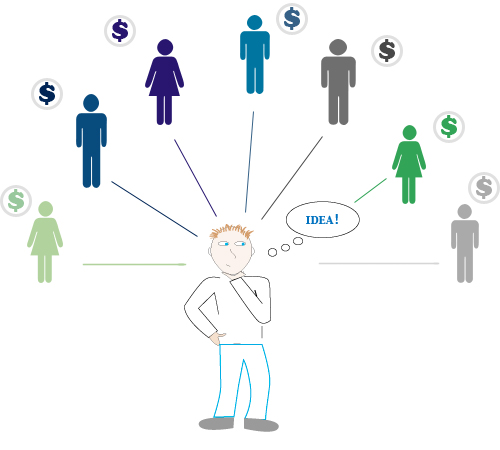 The whole crowdfunding industry, which is in rapid-growth mode at the current moment, is entering a phase of consolidation. The weaker platforms who are unable to drive the necessary volume through their platforms are going out of business, while the stronger platforms (ex. Kickstarter, IndieGoGo) are expanding their market presence and growing their project base. For those platforms that are unable to get the required volume to be self-sustaining, they will either need to change their business model or exit the market. Developing a marketplace (create a store for crowdfunded products), offering ancillary services (ie. video creation) and campaign advisory are but a few of the ways the business model could be augmented or adapted. 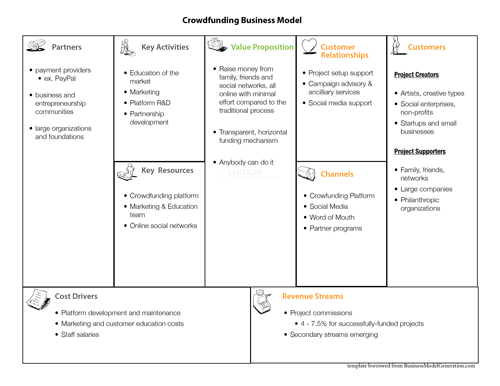 Crowdfunding is more than just an industry for the major platforms, however. An ecosystem is rapidly beginning to evolve around the platforms in the same way that the financial services industry (*cough) built itself around the banks. Advisory groups, legal services, media production and other types of peripheral services are sprouting up as the crowdfunding/investing movement takes hold. Unlike the banking industry, however, every deal done via the crowdfunding/investment platforms is public, for real.

Beyond the peripheral services, there are also a number of new ways that crowdfunding is being applied to old processes. Rather than simply being used to fund specific projects or businesses, crowdfunding is also emerging as a tool to fund community-based projects in areas such as agriculture, housing, environmental initiatives, etc. In this way, crowdfunding is becoming a tool for the commons, one that is redefining how projects at all levels of society are initiated.

Overall, crowdfunding is a dynamic, rapidly-changing industry that is only in its inception. It is a key catalyst in the new financial ecosystem that is evolving, one that is driving the development of a whole new economy. Join the crowd.

Hello!
I want to start a new business, don’t have any money have a patent on a product that world can use .please give info to raise funds some way,
David