Android, Google’s open-source mobile OS (operating system), has taken the mobile industry by storm. In just over a year, Android has gone from a 2% market share in the US, to 28%, and is on the verge of overtaking RIM and Apple as the most popular smartphone platform. While it’s no secret that Google’s decision to open-source the Android platform has been the catalyst for this high-speed growth, what’s less obvious is the business model behind Android. In this version of Business Model Breakdown, we explore Android’s business model and how Google plans to leverage the platform to position itself for the global smartphone revolution.

On Novemeber 5, 2007, Google announced that it was entering the mobile smartphone industry with the creation of Android OS, an open-source mobile platform. At the time, reactions were mixed and skepticism was high – breaking into the smartphone industry was seen by some as a PR move with little chance of success. Now two years later, major competitors including RIM, Apple, and especially Nokia, are looking over their shoulder as Android continues to cut into their market share.

To make Android the overnight success (by smartphone industry standards) that it is, Google partnered with hardware device manufacturers, including Samsung, HTC, Motorola and LG, to create smartphones that run Android OS. Google’s partners create the hardware, and Google delivers the software. By opening up the Android platform, Google laid the groundwork for developers to create the apps and functionality that make it a robust OS.

As Android prepares to take over Nokia and Apple for smartphone supremacy in the next few years, many are wondering where Google makes their money – after all, someone has to be paying the bills for those coders to develop new versions of the platform every few months. Other than the obvious revenue sources, like apps, Google’s business model for Android is part of a long-term strategy to make Google a player in the bold new digital world that will be shaped by mobile devices.

Google’s move into mobile was spurred by the realization that the mobile experience will redefine everything, including search, and that to maintain a long-term competitive advantage in the search advertising space, their bread and butter, they needed to be a mobile player. A recent blog post by Google CEO Eric Schmidt titled ‘Preparing for the Big Mobile Revolution’, shows how focused the company is on developing their mobile capabilities to help proliferate Android devices around the world. And despite the Android strategy being early stage, there’s already strong evidence that it’s working. 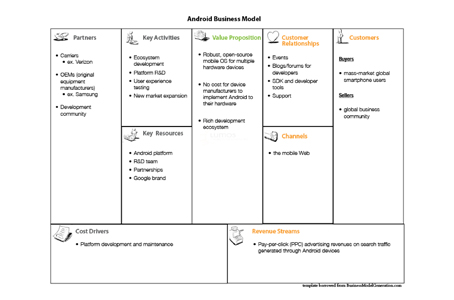 According to eWeek, Google generated $130 million from mobile ads on Android devices in 2010, or $5.90 average revenue per user (ARPU). By 2012, that number is expected to be ten times what it is today, or $1.30 billion, with an ARPU of $9.85. Going forward, the company hopes to target 1 billion users around the planet with the Android platform, a lofty expectation, but one that could be realized given that they currently activate about 300,000 handsets per day.

Overall, it appears that Google has mobilized its resources and shifted its strategy to take advantage of the mobile revolution. With the rapid global uptake of smartphones, the continued mobile ecosystem development, and the high level of innovation, Google is hoping to emerge as the leader of the pack in the global smartphone industry. Doing so would help solidify the company’s business model and ensure that they remain as big a player in the search ad space after the mobile revolution as they were before.