If you have done any online shopping over the years, then there is a good chance that you have used PayPal to make a purchase or two. While many technology companies built in the late ‘90s were wiped out in the subsequent dot-com stock market crash, PayPal pulled through. Today we will look at the business model behind the e-payment behemoth, and analyze how it leveraged the model to pioneer the world of online transactions.

In 1999, Peter Thiel and Max Levchin created a company called Confinity, which launched PayPal that same year as an application to transfer money electronically between mobile devices. When it became clear that the idea didn’t have as much merit as the duo thought, they began looking at different markets and set their sites on the growing Internet. More specifically, they focused their attention on a fledgling e-Bay, which at the time was only accepting payments in check and money order via US Mail. It was the opportunity they were looking for.

While they weren’t the only company to zone in on the opportunity, they were the first to exploit it. Other companies struggled to implement e-currencies, while PayPal took advantage of existing technologies and infrastructure to build a low-tech payment system. The company’s medium for transfer was e-mail, a technology that nearly everyone embraced at that point in time; the funds for the transactions were transferred from the users’ credit card or bank account, which were issued by American financial institutions.

In order for the business model to be successful, there needs to be a significant user base on both sides of the transaction. With PayPal, buyers were excited to use the service because it made it much easier to buy something on e-Bay. Once buyers were on board, merchants and sellers began accepting PayPal because of the increased transaction volumes and the new payment options. With substantial user adoption on both sides of the transaction platform, PayPal began to prove the viability of its business model. 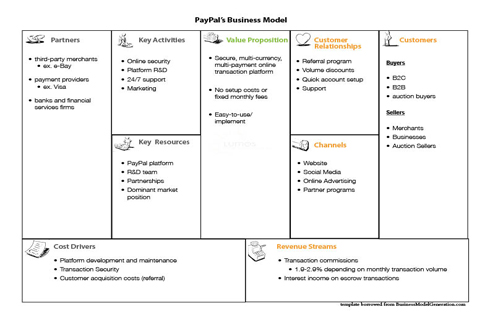 While the company had initial success scaling its user base, the real rise of PayPal didn’t begin until the industrious Elon Musk stepped into the game. In 2000, Musk orchestrated a merger between his company, X.com, and Confinity, and sparked PayPal’s scalability by initiating an aggressive marketing campaign; new sign-up referrals were offered $10 and the user base grew from 12,000 to 2.7 million between January and August 2000.

Despite a growing user base, it took the company some time to determine the best way to monetize users. Initially, it planned to exclusively generate revenue by earning interest on funds in users’ PayPal accounts. Before long, however, it realized the drawbacks of this approach and changed the model to a commission structure. Unlike many online e-payment companies who charged merchants setup and fixed account fees, PayPal decided to make account setup free and charge based on a percentage of the transaction. The seller, not the buyer, pays the transaction fee, which ranges from 1.9-2.9% depending on monthly transaction volume.

The rapid growth of PayPal continued through 2001. In 2002 the company went public on the Nasdaq exchange, before it was acquired by e-Bay for 1.5 billion in stock that same year.

Following the acquisition by e-Bay, PayPal began to grow its user base internationally through the e-Bay platform. After the company successfully penetrated the international market, it began focusing on growing the user base outside of e-Bay. To accomplish this, it increased the PayPal platform’s functionality, beefed-up the sales force and added new options for both buyers and merchants, including a mobile payment system based on text messaging.

One of the keys to PayPal’s success has been its ability to keep the platform secure. After some well-publicized incidents in the early years, the company has subsequently devised a unique account verification policy, created the Captcha technology and implemented an optional security key, among other initiatives. The results have been amazing, as PayPal’s fraud rate of 0.41% remains well below the industry average of 1.5% despite being one of the most targeted sites on the web.

Overall, PayPal’s success in trailblazing the online payment industry is a result of its ability to effectively find and implement a scalable business model. Despite challenges and setbacks, the company’s founders endured and created a simple, innovative e-transaction system that now serves 300 million users. It’s another example of a low-tech solution to large-scale problem, and provides a great model for anyone looking to build a scalable solution for a global marketplace.

What we can offer