Sometimes the best place to find inspiration for innovation is in the third world. Despite the tough times, a pervasive spirit of entrepreneurship and creativity work together in third-world countries to help overcome major challenges. In this month’s version of Businesses with Bang!, we look at M-Pesa, an innovative mobile money transfer system developed in the heart of Kenya.

Perhaps synergy is one of the most cliché words used in business, but anyone who looks at the M-Pesa story would be hard pressed to find a better way to describe it. Started as a pliot project in 2003, a group of partners from countries around the world came together to change the face of commerce in Kenya.

In Kenya, the word Pesa stands for money, while the M represents mobile. Back in 2003, a Vodafone executive identified a challenge Kenyans faced; money was not mobile, it couldn’t be transferred efficiently from one person to another. As a company that thrived on building high-tech solutions for communication problems, Vodafone realized that this project was the opposite; they needed to build a communication solution using low-tech devices. To get the project off the ground, both Vodafone and the UK’s Department for International Development (DFID) kicked in capital from the Financial Challenge Deepening Fund.

Once the funding was in place, Vodafone partnered with Safaricom, Kenya’s leading mobile service provider, Faulu, a local microfinance institution (MFI), and the Commercial Bank of Africa, to set the project in motion. After negotiating a series of hurdles, a six-month trial period was launched using a group of 450 Faulu customers in October 2005; it was very successful. Vodafone was convinced enough to commit its resources to full-scale commercialization of the project in 2006. On September 13, 2007, Safaricom and Vodafone announced the official launch of M-Pesa in the Kenyan marketplace.

M-Pesa is a money transfer service facilitated by mobile phones. Clients with an M-Pesa account can transfer money to anyone in Kenya via SMS. No bank account or Safaricom account are required to register an M-Pesa account, users simply deposit money into their M-Pesa account and they can begin using the service. If an individual receives an SMS money transfer from an M-Pesa member, then they can go withdraw it from a registered M-Pesa agent. The country has thousands of agents (approximately 17,000) scattered throughout various urban and rural centres, making the service accessible to Kenyans whether they work at a big city bank or a small farm in the country.

When the service launched, expectations were kept in check, as it was unclear how quickly the uptake of the service would be due to many potential limiting factors. Among the most prominent were the social factors, such as agents’ reluctance to hand over money based on a simple text message, and the populations general lack of understanding of how to use mobile devices. Beyond that, there were a number of logistical and infrastructure issues that needed to be managed. Despite the difficulties, Safaricom registered 20,000 users within the first month, well ahead of expectations.

Since that time, M-Pesa has gone viral, everybody’s using it. At the end of July 2010, there were almost 12 million M-Pesa users, as subscribership has grown approximately 60% year-over-year (y-o-y) since inception. The amount of money being transferred person-to-person (P2P) has increased 30% y-o-y since 2007, reaching approximately $410.1 million US in July. Safaricom has reaped the rewards for their involvement, as profits from M-Pesa account for approximately 18% of the company’s total profits and they have achieved an 80% market share in the Kenyan mobile market. 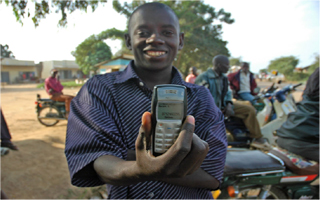 The best part of all is that Kenyans genuinely love the service and it’s re-shaping their lives. Now a rural farmer can get paid for his crop and send money to his family in the same day. M-Pesa has become so popular that it is used as a verb, as people say “M-Pesa me” for money transactions. In fact, you can’t go to a bar in Western Kenya without M-Pesa. While there are still some problems that affect the service, such as cash float and reach issues, M-Pesa has made a profound and lasting impact on Kenyan society.

The success didn’t stop in Kenya. In September, M-Pesa was launched in South Africa through the mobile operator Vodacom, which is round three for the service after it was successfully deployed in Tanzania.

Overall, the M-Pesa story has proved that social and economic rewards are not mutually exclusive in business. Projects like this one must overcome significant challenges to achieve success, but the rewards are exponential. It took strong leadership from Vodafone and a committed effort from all partners to get M-Pesa off the ground. Hopefully we can now use this model to develop similar initiatives in places all around the world. With innovation lagging in Canada, it’s time to open our eyes to projects like M-Pesa and imagine the possibilities, because they’re endless.

Read about our collaborative process and see how Lumos can you make your mark in the world of business.